Here is a sample of some of the words and phrases used in popular blues lyrics. Many of them have more than one meaning. It’s its own language, essential to understand the meaning of the songs.

back door man/friend  1. the lover of a married woman who sneaks out the back door before the man of the house gets home.

barrelhouse  1. a cheap drinking and dancing establishment 2. a fast-paced style of blues or jazz music.

black cat bone 1. a good luck charm that is carried in a mojo bag.

The Blues 1. a style of music developed in the South whose roots are African tribal calls and American gospel music.

boogie 1. to move quickly, to get going, to dance, to party.

boogie-woogie 1. a percussive style of playing the blues on the piano.

canned heat 1. Sterno, alcohol-based, liquid in a can used to cook outdoors.

cold in hand 1. having no money.

dry so long 1. being poor.

dust my broom 1. leaving a place 2. breaking up with a woman.

easy rider (C C Rider) 1. guitar hung on the back of a traveling blues man 2. an unfaithful lover.

flagging (a train, a ride) 1. to signal for a train or ride to stop 2. to hitch a ride.

John the Conqueroo 1. a root kept in the mojo bag for good luck.

juke joint 1. establishment for eating, drinking, and dancing to the music of a jukebox.

killing floor 1. slaughter house where many Southern blacks worked when they migrated to the North.

mojo 1. magic spell, hex or charm used against someone else.

rambling 1. to move aimlessly from place to place.

riding the blinds 1. hitching a ride on the train between cars.

roadhouse 1. a drinking establishment outside the city limits.

Stagger Lee 1. a real life murderer that became a folk hero. He was so bad that flies wouldn't fly around his head in the summer and snow wouldn't fall on him in winter. 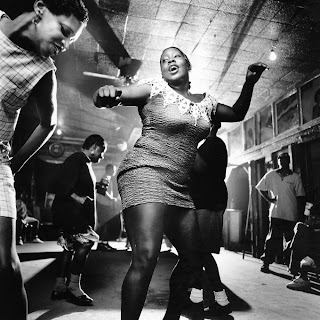